I first heard of Mr. Rogers through my wife, who spent most of the first decade of her life in California. She showed me, on Youtube, a clip of the opening to his TV show. It showed a greying man, seemingly arriving home from a day at work, changing into his cardigan and casual shoes, all whilst singing a vaguely jaunty but not that tuneful song about his neighbourhood. A strange, mildly intriguing artifact to me, a deep well of childhood memories and nostalgia to my wife.

In the following years, clips of Mr. Rogers would catch my attention intermittently on social media. Here he was testifying to Congress about the value of public television. There he is talking to children about the death of Robert Kennedy. I got the impression of an interesting character, a general good egg who I would like to know more about. So when a documentary on his life cropped up on Netflix, my wife and I sat down to watch one Saturday night, expecting a mildly diverting couple of hours.

“Won’t You Be My Neighbour” turned out to be much more than that. It showed Mr. Rogers to be a fascinating man, ahead of his time in many ways, but not without his flaws (one of his sons remarked in the documentary that it could be hard being bought up by a man considered by the world at large almost to be a saint). However, it was his approach to children, parenting and, I suppose, life that really hit home. His whole belief system, and his TV programme was based around the idea that every person, and especially every child, needs to be told that they are loved, that they are special as they are. That kindness,honesty and love are the most important things in life, and that children can cope with being talked to truthfully about difficult subjects. 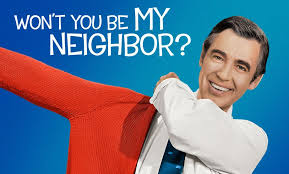 I like to think that I follow these tenets in my parenting anyway, but something about this documentary made me want to try harder, be kinder, be more explicit with my love. The moment that bought on the tears was when Mr Rogers said “You don’t have to do anything exceptional to be loved just for who you are”. It hit home so hard was that for a long time I didn’t believe I could be loved for who I was.

I don’t know why not, as, even though my parents were divorced when I was young, I never really doubted that I was loved as a child. I guess I thought my immediate family didn’t have any choice but to love me, but that someone loving me for who I actually am was different. It took until probably my late twenties to accept that I could be loved, and it is no coincidence that it was only after then that I actually found love.

As I reflected through my tears, I vowed to make sure that those I love know that I love them. I tell my wife and children that I love them often (although I’m not sure it can ever be often enough), but my friends, my other family members, not so much. A lot of my relationships, like a lot of people in this country I suspect, are based around gentle mockery and not showing my true feelings. Telling people I love them does not come easily, but, as I’m sure Mr. Rogers would agree, it’s important that I try. So, if any of my friends and family are reading this, I love you. And I will try to tell you that in real life soon.